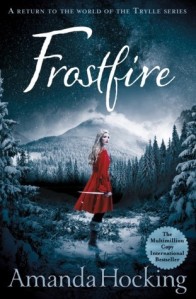 I received this book for free from the lovely people at Pan Macmillan. This is no way affects my opinion.

Synopsis: Bryn Aven is determined to gain status amongst the Kanin, the most powerful of the hidden tribes. But as a half-blood, winning respect is a huge challenge. Bryn’s almost-human community distrusts people, and those from other tribes are almost as suspect.She has just one goal to get ahead: to join the elite guard protecting the Kanin royal family. And Bryn’s vowed that nothing will stand in her way, not even a forbidden romance with her boss, Ridley Dresden. But her plans are put on hold when fallen hero Konstantin starts acting dangerously. Bryn loved him once, but now he’s kidnapping Kanin children – stealing them from hidden placements within human families. She’s sent to help stop him, but will she lose her heart in the process?

“Remember my name. Because I’m going to be the one who kills you.”
“He smelled of cold. Like ice and snow on the harshest days of winter.”

When I first heard about this trilogy, I went on Goodreads and checked out Amanda Hocking. I noticed she has also written a trilogy called Trylle, of which The Kanin Chronicles is a spin-off. I was immediately excited. Why, you ask? Well, I believe I have read the first book in the Trylle trilogy before. Yes, I said believe. I picked it up years ago, and the only clear memory I have of it is that I really enjoyed it. That’s all. I was planning on reading Trylle first, and then moving on to Frostfire. However, I got a chance to read Frostfire thanks to the lovely people at Pan Macmillan and just couldn’t pass it up.
This book far exceeded my expectations. I was hoping for a solid YA fantasy read, instead I got an incredible and mind-blowing story. I read this book in one day, which at any other moment, wouldn’t be that special for me. Right now however, I only have a few hours a day to read and most times, I’m too tired. But this book… It just wouldn’t let me go. I had to keep reading, to find out what Bryn would do next. It held me in a tight grip, and wouldn’t let go until I finished.

When I first read the synopsis, I was a tad confused. It seemed like a lot to happen in the first few chapters especially since the book is not that long. I hoped that the synopsis didn’t actually spoil anything –which has happened to me before. Why would you do that? But I didn’t have to worry. We start with a chapter, a flashback, that helps us put together some background information on events in the past. And then we continue, 4 years later as Bryn has graduated and is officially a tracker doing her duty.
The story was incredibly fast-paced. Like I said, I sped through it because I just couldn’t let it go. Bryn has been a tracker for years when suspicious things start happening while she’s on duty. They’re trying to find out what’s happening, and why Konstantin Black is trying to kidnap changelings. While it was definitely action-packed, I never felt like it was too much; I could follow along easily. I highly enjoyed the plot. The synopsis already seemed amazing, but the actual novel is well written and executed too.

Like I said, I can’t remember anything from the Trylle series, so I was a bit worried that I wouldn’t be able to follow along. But there was no need to worry. I slowly got introduced to Kanin society, its history and people. While Bryn helps Linus, a changeling, settle, she slowly explains him the history of their people. Which was so fascinating! A fantasy story inspired by Scandinavia? Sign me up for that. We learn how they settled in North-America, about the different tribes and how each is special.
For example, the Kanin have certain abilities that allow them to shift appearance with their surroundings. Like a chameleon. The Skoljare are a water-related tribe, some even have gills. The Trylle have psychokinetic abilities. Each tribe has a certain look to it as well. The Kanin have brown hair, eyes and darker skintones, the Trylle have mossy green eyes and the Skoljare are very fair with blond hair and blue eyes.
I applaud Amanda Hocking for creating such an interesting world, inspired by a culture I don’t often get to read about. I never experienced an info-dump moment, as the information gets transferred to you slowly. I can’t wait to read more about the different tribes and their habits/culture!

Bryn. Bryn is our main character, a girl who is half-Skoljare and half-Kanin. This means she has blonde hair, which is why many of the Kanin nobility/royalty look down on her. But she is determined to get where she wants to be: a member of the Hogdragen, the elite guard who protect the royal family. I adore Bryn. She is strong, brave and stubborn but not to the point of idiocy. She doesn’t whine or complain often, which is very much appreciated. But I think the trait I loved the most is that she doesn’t believe blindly. She wants to kill Konstantin for what he did to her father, but when she is presented with information that might point to something bigger, she is willing to stop and think about it instead of slaughtering him anyway. She wants justice, but believes that she should first find the right person for that.
Another interesting character is Ridley, the Rektor. He’s Bryn’s boss, as he is responsible for all the trackers and their assignments. Aaaah, Ridley. He seems like an incredible person. Smart, honest, kind and strong. The only part I didn’t like is that Bryn’s information or logic just didn’t seem to seep through his skull. He listened, but he didn’t actually hear her –if you understand me.
I also want to have a quick word about Konstantin. I am so curious about him! What happened to him? Why is he doing what he’s doing? What’s going on? This guy is clouded in mystery, and I can’t wait to find out more in the following books.

I highly recommend this book. Even if you haven’t read the Trylle series, it doesn’t matter. If you want a fast-paced, action-packed YA fantasy story with amazing characters, set in an incredibly interesting world, go pick this one up. I promise you, it’s worth it!