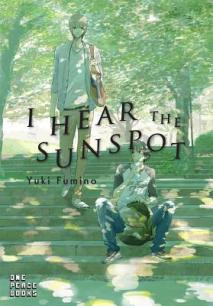 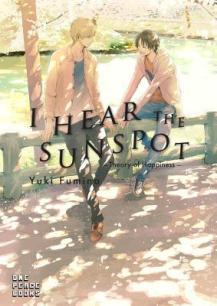 Because of a hearing disability, Kohei is often misunderstood and has trouble integrating into life on campus, so he learns to keep his distance. That is until he meets the outspoken and cheerful Taichi. Taichi’s words cut through Kohei’s usual defense mechanisms and open his heart. More than friends, less than lovers, their relationship changes Kohei forever.

I never thought I’d end up loving this manga as much as I do. A few weeks ago, I saw a BookTuber recommend an app called MangaRock, where you can read manga translated by fans. I spotted I Hear the Sunspot and decided to give it a try. I fell in love with it immediately, and went on a furious Google search for the translation. After discovering there were three translated volumes published, I immediately bought them all. A week later, I’ve also read all three. And read the extra chapters that were translated on MangaRock but haven’t been published in English…

So what is this series about?

We follow two university students, called Kohei and Taichi, as they meet for the first time. Taichi falls and ends up landing close to Kohei who is eating lunch. Taichi, being someone who is always hungry starts talking to Kohei, who ends up giving him his lunch. They become fast friends afterwards. And more.

Here’s why I love this series so much.

First, disability representation. I rarely ever see disability mentioned in novels, especially in contemporary ones. To be honest, I can recall even less graphic novels, manga, etc. that talk about disability, but that may just be because I’ve missed out on the ones that do.

Kohei has a hearing disability, and is hard of hearing. He isn’t deaf, but has experienced his hearing get worse lately. It’s hard for him to truly socialize with the other university students for a multitude of reasons. He doesn’t always want to ask people to repeat themselves. Reading lips is exhausting. The sheer amount of noise is incredibly overwhelming and makes it harder for him to filter out the person’s voice.

I can’t speak for the accuracy of the representation, because I don’t have a hearing disability, and I haven’t seen an #ownvoices review yet. However, I did love that aspect of the manga. Throughout the series, they talk about reading lips, sign language – and signing versus Japanese Sign Language – the fact that everyone’s experience is different, that hearing impairments are never the same for everyone, and so on. While Kohei does hear some things, he relies mostly on lip reading. Obviously, that brings challenges with it all the time, some that people simply don’t think about because they aren’t in the same position. There are also characters who are deaf, and talk about how different there experiences are, even from those who have a hearing disability too.

Anyway, it discusses a broad range of topics related to hearing disabilities, and I loved it.

The friends-to-lovers. Yes, this is one of my favorite tropes ever, and there’s a reason why. I loved watching Kohei and Taichi get to know one another, and seeing them slowly develop feelings. I’m also incredibly grateful that there wasn’t an incredibly long period of time before one of them spoke up. Kohei knew how he felt, and decided to show Taichi. It was adorable.

This entire series is adorable, and I need more. There, I said it.

It also has some sad moments, and conflicts. Obviously, otherwise the story would be fairly boring. In ever relationship – whether it’s a romantic or a platonic one – there will be conflicts. Taichi and Kohei face some issues brought forth by the fact that one of them has a hearing disability and the other does not. While we can do our best to listen, understand, and adjust our behavior, we can never truly know what it’s like to live with someone else’s disability. THAT ENDING THOUGH.

Side characters. I also grew quite attached to the side characters, especially Ryu who is introduced in the third volume.

The art style. Often, when I read manga I find it difficult to distinguish what’s happening on the page. The art can be overwhelming, as so much happens on a page. I never had that problem with I Hear the Sunspot. I thought the artwork was so neat and wonderful, incredibly easy to follow, but still dynamic.

If I haven’t convinced you to read this by now, I probably never will. Honestly, that saddens me to no end. You don’t want to see me sad, do you? Right? So go ahead and read it! It’s truly adorable and wonderful.